Log truck operators and forest owners have today signed an updated Log Transport Safety Accord designed to further improve the safety of all road users. 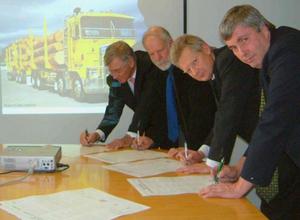 Since the accord was first signed in 2001 there has been a 65% reduction in log truck crashes, and a 75% reduction in rollover crashes, during a time of rapid growth in the logging industry. Log Transport Safety Council chair Warwick Wilshier said the Accord has been updated with the aim of reducing the rollover crash rate even further.

“After a dramatic fall from 1996 to 2004, rollover rates have stabilised at between two and three rollovers for every 10 million kilometres travelled. The risk of a log truck rolling over is now little more than for an average heavy vehicle. This is a remarkable result, given that log trucks often operate on back country roads that are not as well engineered as the highways used by most heavy vehicles,” he said today.

Nevertheless, Mr Wilshier says there is the potential to improve safety even further, and with the numbers of heavy vehicles on the road increasingly steadily this has to be a priority. In the late 1990s there were several high-profile fatal crashes involving log trucks rolling over into the path of on-coming traffic.

Public concerns about log truck safety were borne out in a 1997 study that found log trucks were four times more likely than the average heavy vehicle to roll over. If off-highway log trucks were included, one logging truck in every 11 was rolling over each year.

“That’s all behind us. Log trucks are now are as safe as most other heavy vehicles, thanks largely to the work of the Council,” said NZ Forest Owners Association chief executive David Rhodes.

“Set up by forest owners, the Road Transport Forum, government agencies and other groups with an interest in log transport, it embarked on a number of initiatives that have doubtless saved many lives.”

“The introduction of 22 metre trucks was a big breakthough. By increasing the length of trucks by 2 metres beyond the previous maximum, without increasing overall weight, vehicles could carry two packets of logs on their trailers at a significantly reduced height. Rollovers of 22 metre trucks are virtually unheard of.”

Covert monitoring of speeds around curves has found that there has been no increase in speed despite drivers having more stable rigs. These studies also reveal that log trucks typically travel around curves 5 km/h slower than other trucks.

Road Transport Forum chief executive Tony Friedlander said the accord commits drivers, their employers and the wider forest industry to improve the safety of road users by reducing the incidence of log truck accidents. The 0800 LOGTRUCK scheme will be continued. All log truck drivers will either be qualified, or working to become qualified for the work they are doing, and will be committed to safe driving speeds - especially on corners.

“Forest owners and transport operators strongly oppose overloading and have agreed under the Accord to develop improved systems to identify and discourage the practice,” Mr Friedlander said.

“They also support the LTSC reviewing and revising truck and trailer manufacturing standards to improve safety, with any changes adopted as quickly as practicable.”

He says the industry recognises that some road users are apprehensive about sharing highways with large trucks.

“The log transport industry is fully committed to the safety of all road users and will not allow its greatly improved safety performance to be compromised. Indeed, we will be looking to improve safety further as we explore modifications designed to improve the productivity and fuel efficiency of the industry and to reduce its environmental impact.

“There is also a place for improved education of truck drivers and the public, so there is a better awareness of things like overtaking safely and the distance a loaded truck needs to slow or stop.”